I remember you well in the Chelsea Hotel,
you were talking so brave and so sweet,
giving me head on the unmade bed,
while the limousines wait in the street.
Those were the reasons and that was New York,
we were running for the money and the flesh.
And that was called love for the workers in song
probably still is for those of them left.
– Leonard Cohen, Chelsea Hotel #2.

New York City’s Chelsea Hotel has a colourful history longer than the Brooklyn Bridge, and deeper than the Hudson. It first opened it’s doors around 1885, originally as an apartment cooperative, before reopening in 1905 as a hotel. It went on to be a mecca for artists both at their height of their career and sometimes right before they bottomed out. Writers, musicians, fashion designers, photographers, filmmakers, anyone who was anyone could be seen roaming the hallways or holed up in their rooms drinking, plotting, scheming, partying and creating works that still resonate, like Arthur Miller, Arthur C. Clarke, William S. Burroughs, Leonard Cohen, Andy Warhol, Dennis Hopper, Jack Kerouac – the list can and does go on and on. Unfortunately whatever infamy and notoriety the Chelsea held was sealed the fateful night that Sid Vicious stabbed his girlfriend to death in room 100; but it’s rich cultural history runs much deeper than a knife wound to the abdomen. It’s current fate seems unknown as it’s since been sold and closed for renovations, yet one thing is certain. Nothing remains the same.
Above Photo by Julia Calfee. 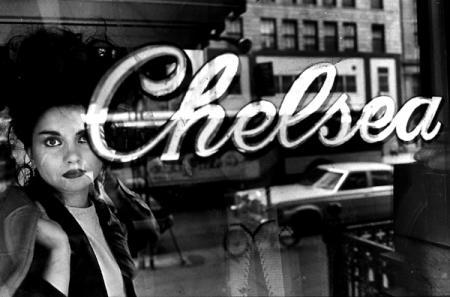 You may also want to check out:
Last Concert for the Sex Pistols
Rare Andy Warhol Video Resurfaces

6 thoughts on “The End of An Era: Chelsea Hotel Closes It’s Doors.”