Edinburgh born author and counter culture legend Irvine Welsh dropped in on the Reddit community for an AMA session while promoting his latest book The Sex Lives of Siamese Twins.

Here are some highlights:

On who he based the Sick Boy character on:
“Sick Boy is probably an amalgamation of about 2-3 people. I think all characters are also a little bit a part of the author, or a younger version.”
On his inspiration for Filth:
“I worked in Edinburgh Council and there was a crazy guy who hated the world. He hated his bosses, and his subordinates. I thought: make him a cop, then he can do some real damage. There is always a lot of stuff in the papers about dodgy coppers, because its far damaging than dodgy council workers.”
Does he still do drugs?:
“I can’t really handle them now. You spend so much of your life fucked up that being sober feels quite trippy. If something new and mind-blowing came on the market though…”
And finally: What was the magic secret behind the now infamous Trainspotting toilet scene?
…Yorkie Bars.

While the interview may not prove the most lengthy or provocative AMA’s, there are some kernels of interest about what makes him tick as a writer. Most notably, that he doesn’t write unless he gets an uncomfortable feeling from the material. There’s a reference he makes to a notorious interview he gave for Rebel Inc. where he takes ecstacy in the middle of it with Kevin Williamson. It’s not easily found on the interwebz, so I’ve been unable to come up with a link for it. For anyone (like myself) hoping to hear news of Porno hitting the big screen, we’re not left with any definitive news, unfortunately. He does, however talk about how his past drug use influenced his works, as well as what he thinks of the EDM scene in the US, and what he puts on his pizza.

Read the entire AMA over here. You can read more about Welsh’s new novel over here.
And finally, from the internet archives, here’s a brief interview with Welsh on the set of Trainspotting shot on vintage Hi-8 below.

Above Photo courtesy of The Cavern 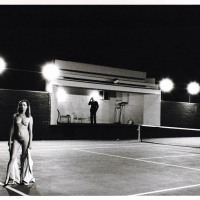