Portandia is a new comedy series that takes place in Portand, Oregon and stars SNL‘s Fred Armisen and Carrie Brownstein. It’s old school sketch comedy with the occasional musical number that pokes fun at hipsters, cyclists and various pockets of generation Y segments. Check out a clip below of a painfully over the top eco-conscious couple ordering chicken in a restaurant. 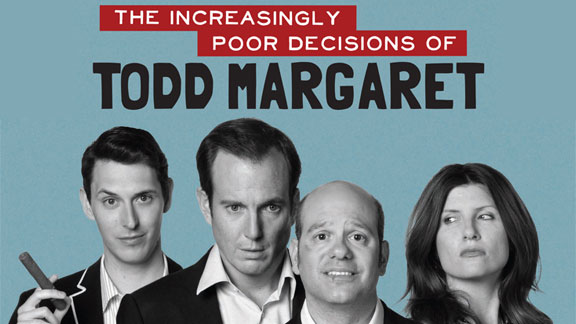 IFC is also running a new show called The Increasingly Poor Decisions of Todd Margaret, starring the multi-talented David Cross. (Yes, Tobias Fünke from Arrested Development!) And while Portandia is clever and amusing, Todd Margaret is laugh out loud hysterical. After falling into a new job promotion by his boss played by Will Arnett, Todd (a hopelessly pathological liar) moves to England to sell questionably safe energy drinks. Watch a clip below of him pretending to be deaf. Hilarious! It’s great to see that some networks are still putting out some edgy, intelligent comedy out there.

You may also want to check out:
Svetlana: The Russian Hooker Series That Will Blow You…Away
Shameless + Episodes: Two Fresh Comedies That Deliver
Top Twelve Comedic TV Shows of All Time

Like Loading…
Previous: Fight The Power: Internet Sites Go on Strike in Protest of SOPA & PIPA. (Technology)
Next: 5 Insanely Cool Movies To Look Out For in 2012. (Film)